Seagulls and other types of birds that congregate along the sea are a constant nuisance to many. They are primarily known to be aggressive because they’re constantly in search of new food. One of the worst things you can do at the beach would be to begin feeding them. They will NEVER go away. Birds Beware specializes in the humane control of local Seagull populations throughout Monmouth County and in addition: New Jersey as a whole.

Seagulls are incredibly intelligent birds. So much in fact, that they’re known to carry clams or mussels high in the air, only to drop them on hard surfaces in order to access the meat inside. If you’ve ever been to the jersey shore, or any beach for that matter, you’d have noticed dozens or hundreds of seagulls either flying or just standing around on the sand. They’re not there to catch a tan, Seagulls are constantly looking for a new food source. At public beaches despite the rules, most people aren’t too conscientious of polluting and leave behind food. Besides the everyday prey that exists in the ocean or other bodies of water, they’ll sit alongside the coastline in an effort to get whatever scraps are left behind by beachgoers. 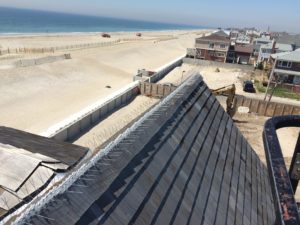 If you own commercial property or operate a business near the coast line, you’re at far greater risk for habitat of Seagulls. They tend to nest alongside modern-built structures (buildings) with flat roofs and straight sides. What you have to understand is that Seagulls have adapted over decades of time spent chasing new prey and watching us leave food behind for them to eat. They know where the food’s at and because of their knowledge, they are a constant annoyance in urban areas. Not just beaches or waterfronts.

Urban areas are filled with Seagulls because they flock to wherever food may be. In this case, you’ll see them all over landfills, lined up on city streets pecking away at garbage bags or food left behind, near public garbage cans or disposals and eventually your rooftop to nest.

The Hazards of Dealing with a Seagull Flock

Seagulls can potentially cause great financial loss to your business. Many people are put off from entering stores when they see an entire group of birds hovering close by. This will cause people to turn the other direction or go to a competitor that doesn’t have a bird problem.

Another major threat is that of disease. Since Seagulls scour garbage sites for food, they carry disease such as salmonella. They also defecate and vomit on their young in order to protect them. If you have an infestation, these are all sources of contaminants. People could get sick and it could turn into a major health crisis. These things tend not to go well when the health department is concerned, especially when it comes to word of mouth business.

We have an entire program setup and dedicated to the humane control of a Seagull population within your property. We’ll start by investigating what might be attracting the Seagulls to your property in the first place. Occasionally, we’ll come across a customer who has been leaving food out. This would be an obvious red-flag for us and we’d make a recommendation to the customer to start sealing up food.

Once we’re done advising, we start taking more aggressive actions such as removing any potential nesting sites and installing Seagull deterrent devices. The most successful of which happens to be known as “Bird Netting.” This will keep Seagulls off your property and prevent them from nesting on your rooftops. Overhead Grid Systems are also a possibility depending on the project and are usually placed alongside rooftops, ponds, pool areas and more.

If you have any questions or would like a consultation regarding Seagull control or removal, feel free to give Birds Beware Inc. a call today. We look forward to hearing from you.

Get a Free Bird Control or Removal Quote Now
Read or Write a Review About Birds & Geese Beware, Inc…